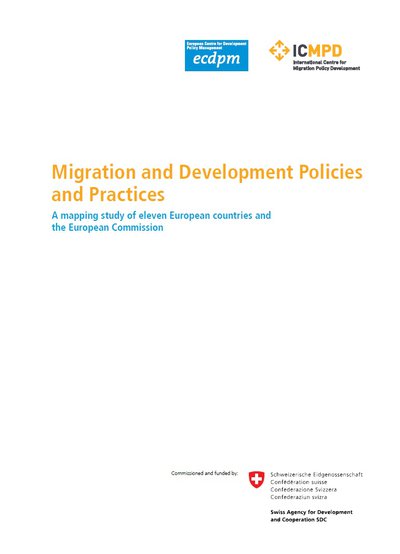 Chapter by Lisa Salcedo Pfeiffer in ICMPD, ECDPM, Migration and development policies and practices: A mapping study of eleven European countries and the European Commission, Swiss Agency for Development and Cooperation, Bern, 2013, pp. 145-153

PhD candidate Lisa Salcedo Pfeiffer contributed, with the chapter on Spain, to this study commissioned and funded by the Swiss Agency for Development and Cooperation in order to provide valuable input for continued Policy discussions at the European level and beyond, as well as assist states in identifying future directions and common ground for addressing the inherent development potential of migration in the global, regional and national Migration and Development (M&D) debates.
The Study was launched on 22 May 2013 in the framework of the side event the Global Forum on Migration and Development (GFMD)'s first Thematic Meeting "Operationalizing Mainstreaming of Migration in Development Policy and Integrating Migration in the Post-2015 UN Development Agenda".

Spain has experienced an exponential increase of foreign population during the economic boom 1998-2008 and received more than 5 million foreigners in less than a decade, who now account for 12.3% of the Spanish population (2011 figures).263 Moreover, it is worth noting that among the foreign population, 56.6% come from developing countries. This, together with the lessons learnt from its own experience as a country of emigration in the previous decades, has led Spain to adopt an important role in the design of M&D activities. Spain has moved from a the co-development approach, initially carried by local and regional authorities and focused on the contribution of migrants’ associations in their countries of origin, to a broader approach of the M&D nexus. M&D is defined by the State as an integral part of the Spanish external cooperation policies as well as its domestic integration policies. M&D programmes are mainly implemented by the Ministry of Foreign Affairs. However, the constitutional Law 4/2000 of 11 January on Rights and Freedoms of Foreigners in Spain and on their Social Integration defines the M&D nexus as one of the principles to be followed by all public administrations in charge of migration issues. Informal inter-ministerial meetings for the coordination of migration policy take place fortnightly. In Spain local and regional authorities and the private sector, such as banking institutions and workers’ associations, are actively involved in the implementation of M&D activities. Priority regions in terms of M&D activities are Northern and sub-Saharan Africa and Latin America.

Since its accession to the EU, Spain has had a pioneering and very active role in the promotion of the M&D nexus. It is the initiator of the EU Global Approach to Migration (GAM) together with France and has actively contributed to its promotion and implementation. Spain has so far been an important participant and contributor to all the editions of the Global Fund for Migration and Development (GFMD) and is involved in the UN High-level Dialogue on Migration and Development (UN HLD).