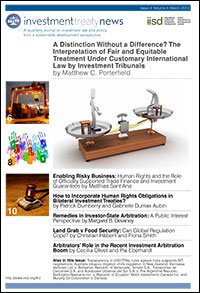 This article is the shortened version of the paper "Food Security, Foreign Direct Investment and Multilevel Governance in Weak States" presented by Christian Häberli and Fiona Smith at the SIEL 3rd biennial global conference held in Singapore from 12 to 14 July 2012.

It is now clear that in order to feed over 9 billion people by the year 2050, much more research and technological development, investment in agricultural production and international trade will be necessary. In many countries a key source of investment will have to come in the form of Foreign Direct Investment (FDI): that is, where foreign operators, often investment funds, invest in assets for the purposes of production. One of the most infamous ways this can occur is when a foreign investor acquires large tracts of land for the purposes of cultivation, ignoring traditional land tenure rights with written or tacit consent and support of the host government—this is the so-called ‘land grab’ phenomenon. While FDI issues are not limited solely to ‘land grabs,’ the difficulties in the agriculture context have been well publicised by NGOs and in the media: displacement of domestic producers and indigenous populations to make way for the investor, over-use of water resources (‘water grab’) and export of agricultural production from food deficit areas are some of the problems, especially in states with weak domestic governance structures. The host state’s food security in this scenario can be undermined rather than strengthened by the investment even where it brings substantial increases in productivity. This is problematic as the host state has a duty to uphold its citizens’ rights in international and regional human rights law; specifically, their right to food and the right of indigenous peoples to use their land and exploit natural resources on that land for the purposes of feeding themselves.
Read more